An ongoing project for the class, 3D Printing

Part of the 3D Printing class offered at Wentworth, the TorSen LSD was the assembly chosen to be personally designed and printed.

The main project in the class involved designing an assembly. This assembly must transmit a force in some type of way, whether that be allowing a marble to move around a track or making gears mesh together. In addition, the final project cannot be hand assembled, it must come out of the printer as a full assembly. The only interaction can be cleaning out support material.

The concept chosen for this project was a TorSen style limited slip differential. A TorSen Differential works similar to other differentials in how power is transmitted. An input shaft and pinion spins a ring gear connected to a housing suspended inside the differential. Inside the housing are the two output axles with helical gears. The helical gears mesh with pair of other helical gears within the housing. When both axles have an equal torque, the housing spins both axles at the same rate and the inside helical gears do not engage. When there is an unequal torque, and therefore one axle is moving at a different rate than the other, the inside helical gears engage and spin their pairs that are connected with spur gears, delivering a certain amount of torque to the other axle. Complicated description for something simple. For a better representation, see this video: https://www.youtube.com/watch?v=JEiSTzK-A2A&t=40s

The differential was designed from scratch in SolidWorks, utilizing the toolbox items for the gears. The housing was created with advanced SolidWorks features such as wrap, and project sketch to extrude cut holes for cleaning support material into a cylinder.

Once the design was completed, a printer was needed to be chosen, and the design reworked for the appropriate tolerances. The printer chosen was the Stratasys Object 24, for its superior tolerances and print quality. The downside to this printer was the need for support material everywhere, as it was a photopolymer style printer. The cleanout process was extensive.

After reworking the model for tolerances, two test prints were conducted to test the meshing characteristics of the helical gears on the axles. The first test proved that the tolerances were much too large, and the gears would not engage without slipping unacceptably. The second test print was adjusted to be just over 0.3mm, well within the capabilities of the Objet, but spacious enough to allow gears to mesh without friction being too great.

The final print took over 54 hours, used about 1300 grams of build material and about 1400 grams of support material; the largest Objet print Wentworth has ever completed. Maxing out the build volume, the print came out as a six pound block of photopolymer and gummy support material. After three days of cleaning, the housing spun on the axles, and the gears meshed and allowed the axles to turn at different rates.

Presentations went well, and it was very interesting seeing the differences and design choices of other students. 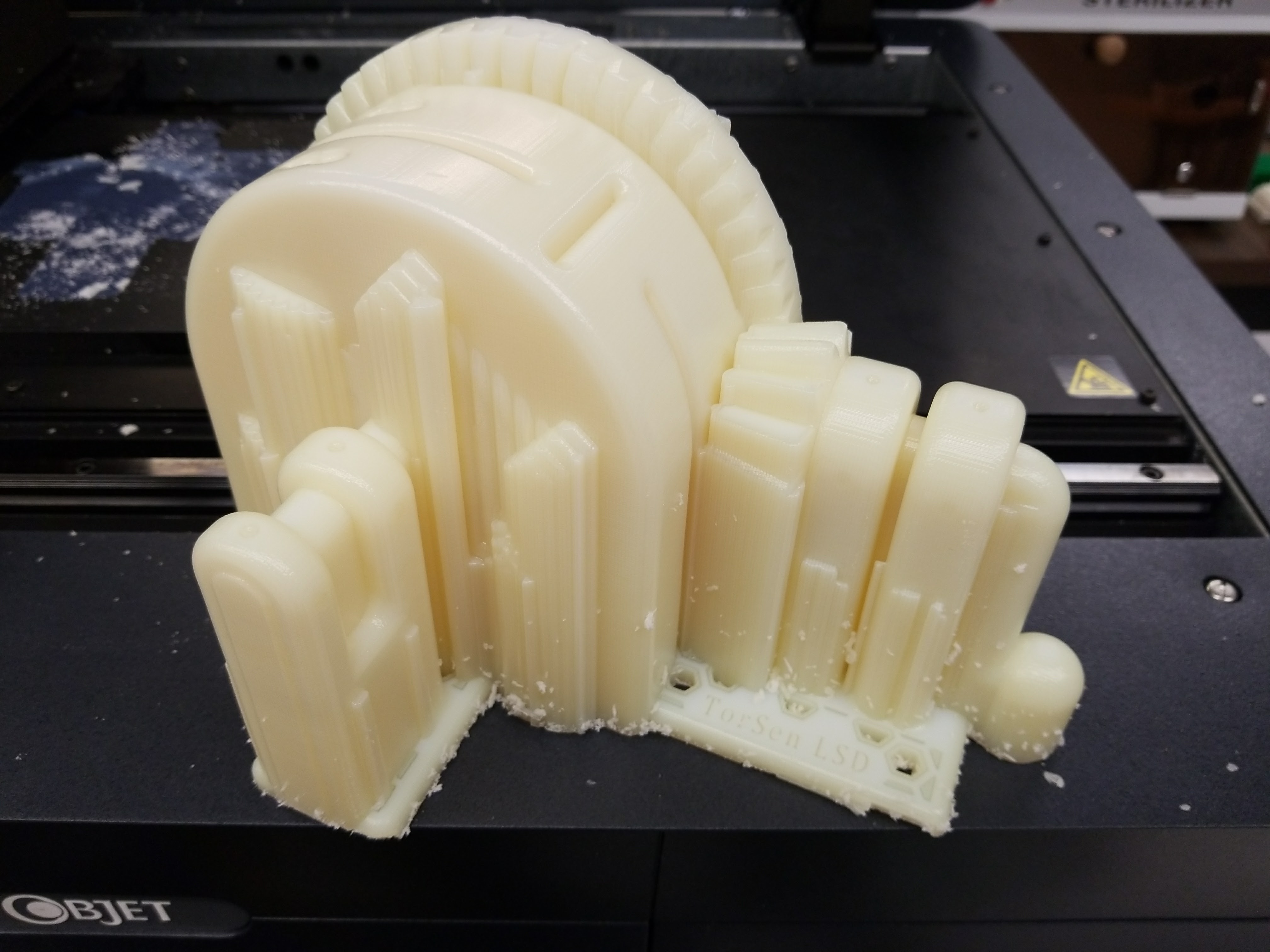 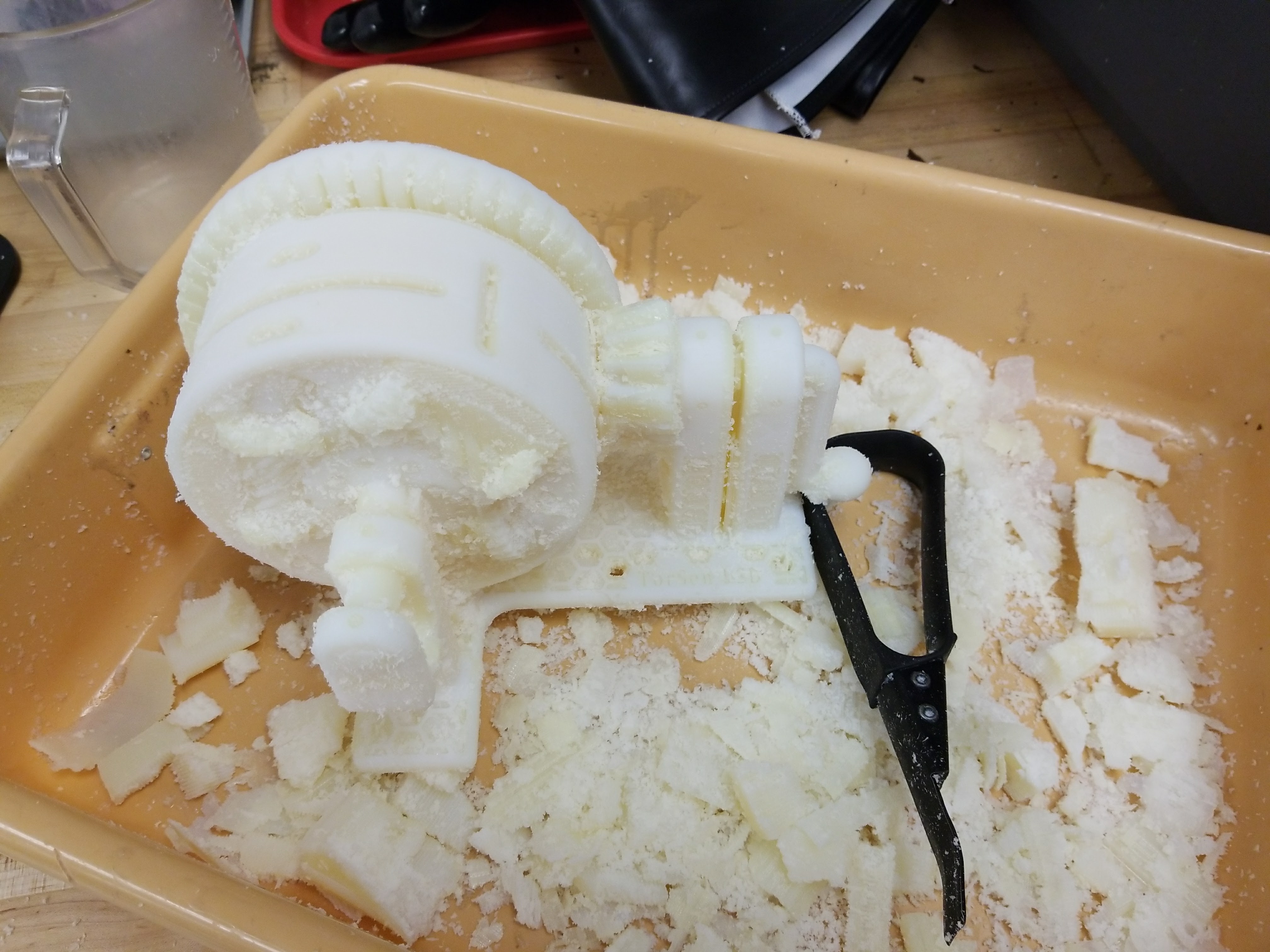 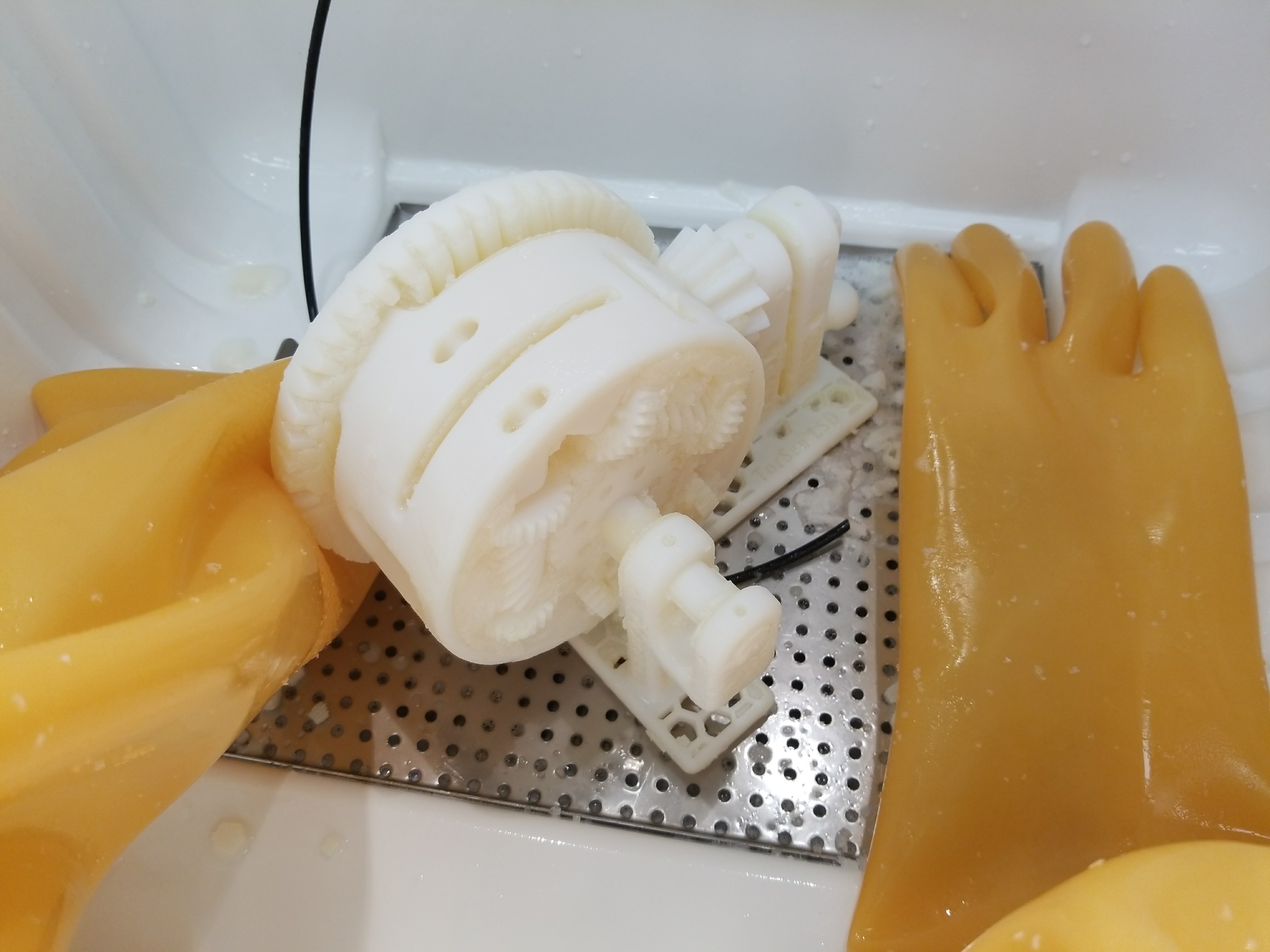 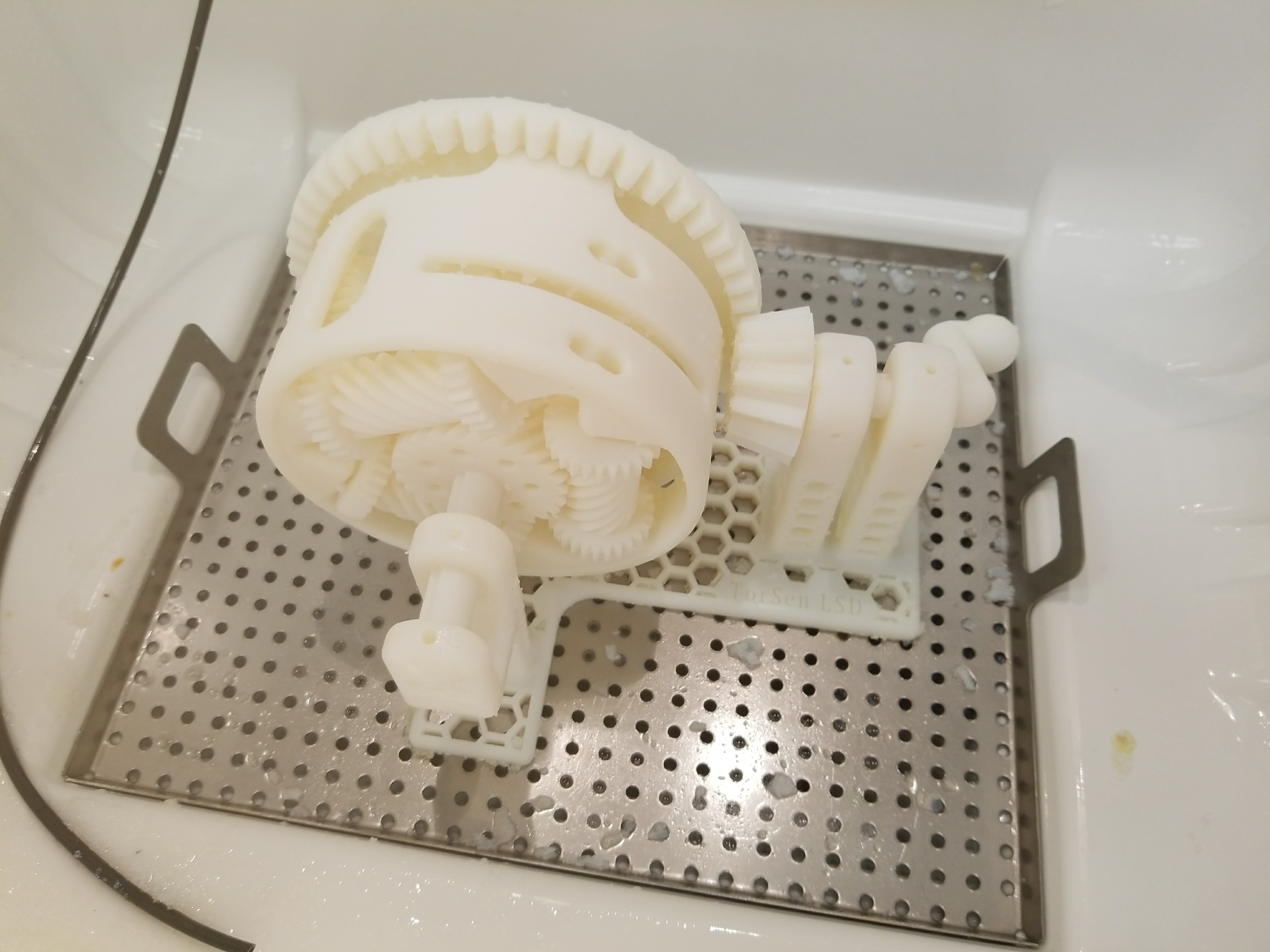 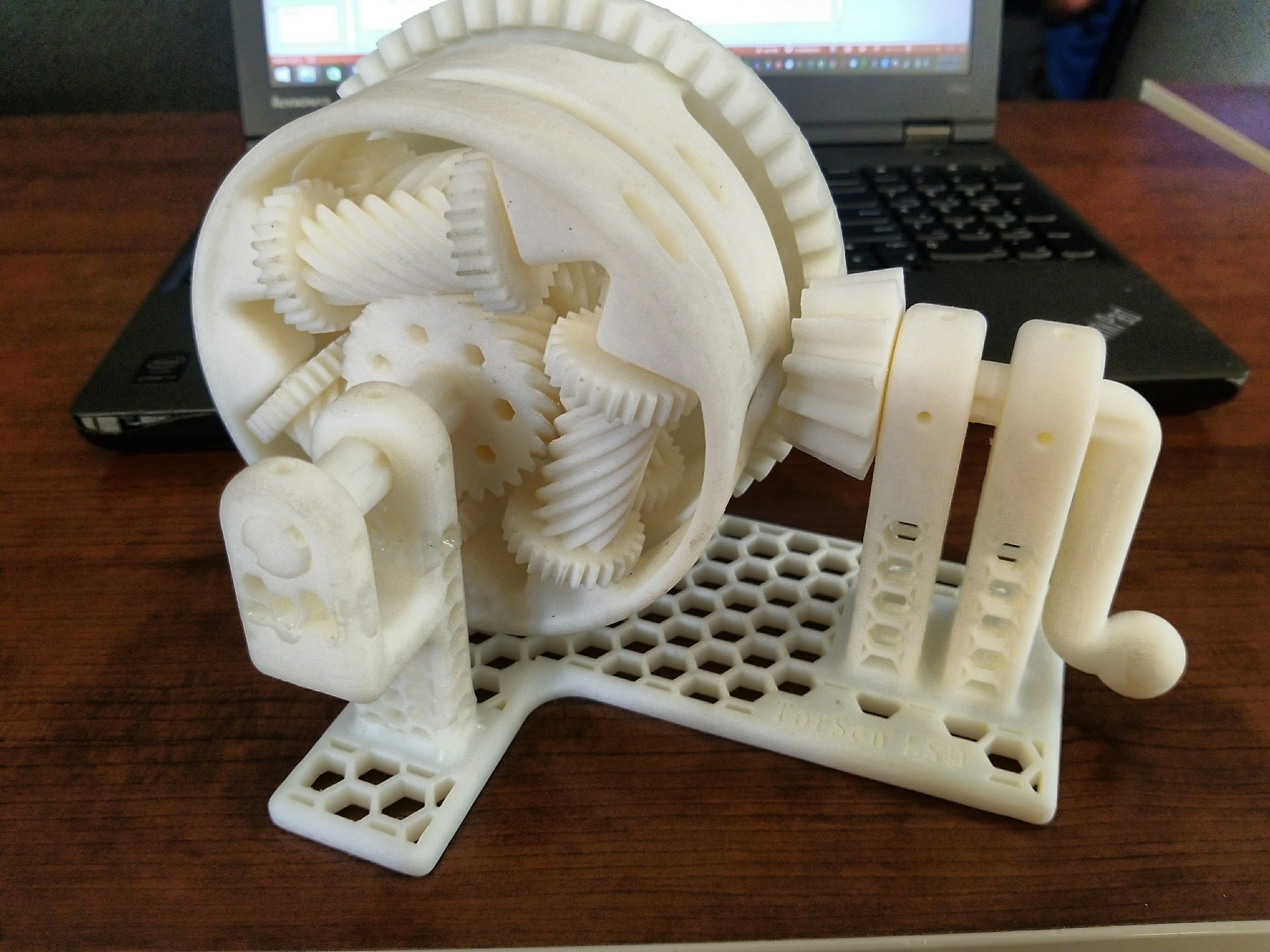