The purpose of the Senior Capstone Design Project is to use knowledge acquired over the course of schooling to design, simulate, build, test and finalize a new and innovative product. Groups research and develop products of their own design and creation and showcase them to the school at the end of the second Senior semester.

The purpose of our project is to provide fishermen with a system that will take line in at the press of a button. Taking line in when a fish is on is incredibly important. Sudden tension changes due to changes in the direction of the fish can cause the line to snap. If a fish makes a run toward the fisherman, the fisherman must take line in to prevent any slack in the line. If the fish darts back the opposite direction, that slack could cause a snap and the fish will be gone. In addition, reeling in line all day long can cause an amateur fisherman to become fatigued and lose interest in fishing. Our product aims to allow people to fish all day while providing them with some help to make it easier on the arms and allowing them to fish using the reel, keeping the sport and the challenge alive.

The ReelEasy design project our group decided to pursue has a few design goals that are required for the product to be innovative and unique if it came to market.
1. The product must allow the user to retain manual control of the fishing reel using the reel handle as it was originally designed. There are no other products that allow this to happen on the market.
2. The product must be cost effective. Most solutions that are similar in design and concept can reach well into the range of thousands of dollars. Our goal is to stay under $200 for a deliverable product.
3. The design obviously must be waterproof. The motor and gearbox system are currently sealed with o-rings.
4. The ReelEasy system needs to have some type of slip clutch system to prevent motor damage.

Currently we are in the prototyping phase. After completing a SolidWorks model and completing a few simulations on the housing, we are preparing for 3D printing a prototype. Based on our simulations, the housing will be strong enough to withstand the worst case loading impact of the motor on the orientation keys in the housing. After finishing our simulations and designs, we are ready to print. We have a few options for 3D printing, with our first prototype being printed on a MakerBot, since it will be quick and free for us to use here at school. Once we have a prototype design, we will look into using a higher quality 3D printer at Wentworth for a better looking and stronger design.

After design and analysis using SolidWorks, it was proven that our design would be feasible and under budget for the prototyping stage. The second semester began with creating the STL files needed for the MakerBot 3D printers that are free for students to use at Wentworth. One of the bigger hurdles encountered in the beginning was the build volume of the printers. The main housing is the correct size to fit in the printer, but only in certain orientations. Knowing that the layers could separate under torque and that the build and support material were one in the same, orientation had to be chosen carefully. Having the housing lying on its side, where it would fit, caused the entire motor cavity to be filled with support material. Having it resting on its base removed that problem, but was thought to be too weak of a design with how it would be printed.

The first prototype was made with the standard settings of the MakerBot software. Infill was only at 10%, and the settings for breakaway supports and bridging were not tweaked. The print lasted only three hours, and looked great at first glance. After picking it up, it was clear that the lack of infill made the part weak, and the support material was nearly impossible to remove from the inside of the housing.

The second prototype was tweaked, and infill was increased to 80%; nearly quadrupling the print time. The part was much more sturdy, but another issue presented itself.

One of the nice things about the MakerBots is that they are free, but that allows anyone in the school to use them. Print time is a hot commodity, and reserving a slot may push milestone dates back by weeks. The second prototype had breakaway supports, increased infill, and correct orientation. A day of build time later, we received the parts. The printer had malfunctioned only a few layers in, causing separation on every part on the build tray. The parts were useless. There was nothing we could do to remedy those parts, and more time on the printers had to be booked.

After checking and rechecking the print files and settings, we set out for our third and final prototype. Thankfully, this one came out perfectly, and was printed in a clean white filament as well. The next step from there was machining all of the aluminum parts to assemble the final product.

The machining went off without a hitch. Clearances and fitments were worked into the design on SolidWorks, allowing for the expected margin of error that would come from hand machining the parts. Once all the parts were done, we ran into our next issue.

When it came time to install the parts, it became clear that the SolidWorks model for the entire assembly and the connections to the fishing reel were not correct. It was not taken into account that the rotation of the reel handle would interfere with the housing. Back to ordering parts. Another shipment from McMaster-Carr gave us a longer belt that would give us the clearance needed.

Then the next problem reared its head. The quick change reel interface that was created had incorrect thread sizes for the reel that was going to be used for the prototype. Threads would have to either be custom made on the lathe, or a new reel chosen. Opting for the latter, with its relatively more common thread pattern, a new adapter was designed. The threads happened to be reverse thread, which makes sense. using the reel shouldn't cause the handle to back itself out. After ordering a reverse die, the threads were created and the final prototype was assembled.

Another issue, and this one just a few days before the report and showcase. During the extensive testing, it was discovered that the rotation of the reel caused the motor pulley to back off its threading the housing, binding the motor. Thankfully no damage was done, as having a ball detent clutch system in the motor prevents any situations that could cause harm. Disassembling the whole prototype was now required, and a healthy dab of locktite prevented any more mishaps.

The project was finally complete. It was honestly quite amazing to see something that we put so much work into come alive. The motor drove the reel with decent force, and the speed was well beyond what a normal human was capable of. Reel Easy came alive, and was a huge success at the showcase. 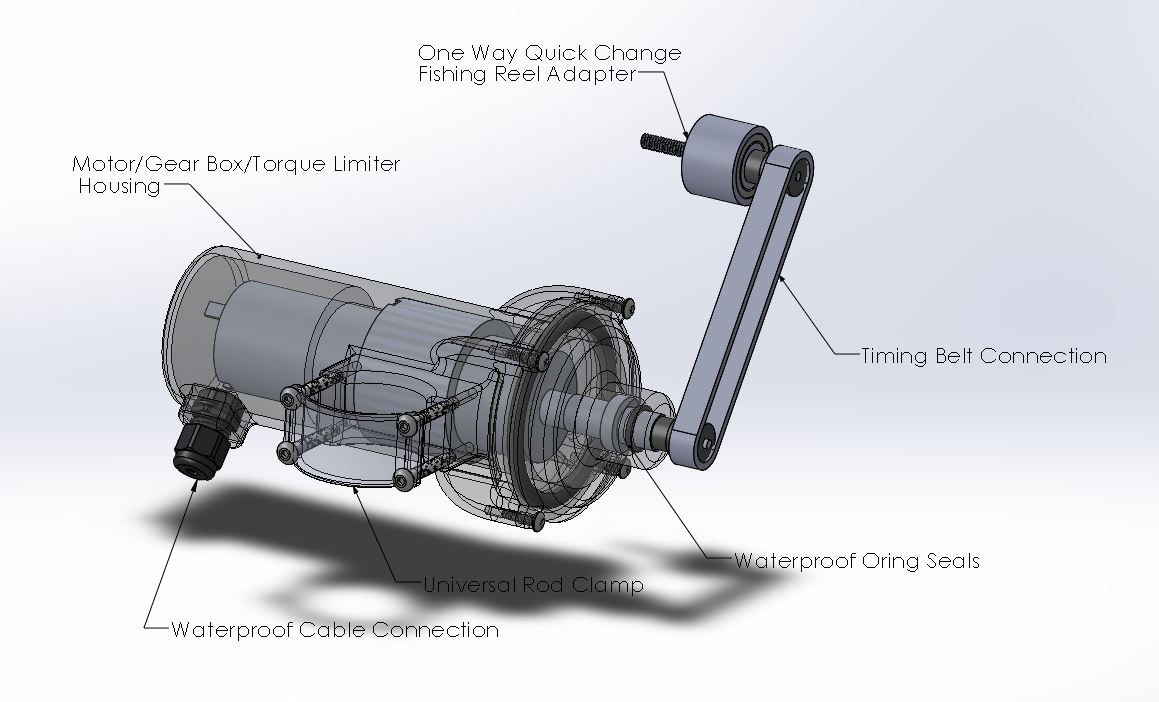